The Census is conducted every five years with the purpose of collecting demographic, social and economic information of Canadian residents. This information is used by the government, the private sector, social service sectors and other organizations to make informed larger-scale decisions such as policy making, program design and infrastructure development. The 2021 Census security code was mailed out on May 3rd. Using the code you can access the questionnaire online, however a hardcopy version can be requested as well. 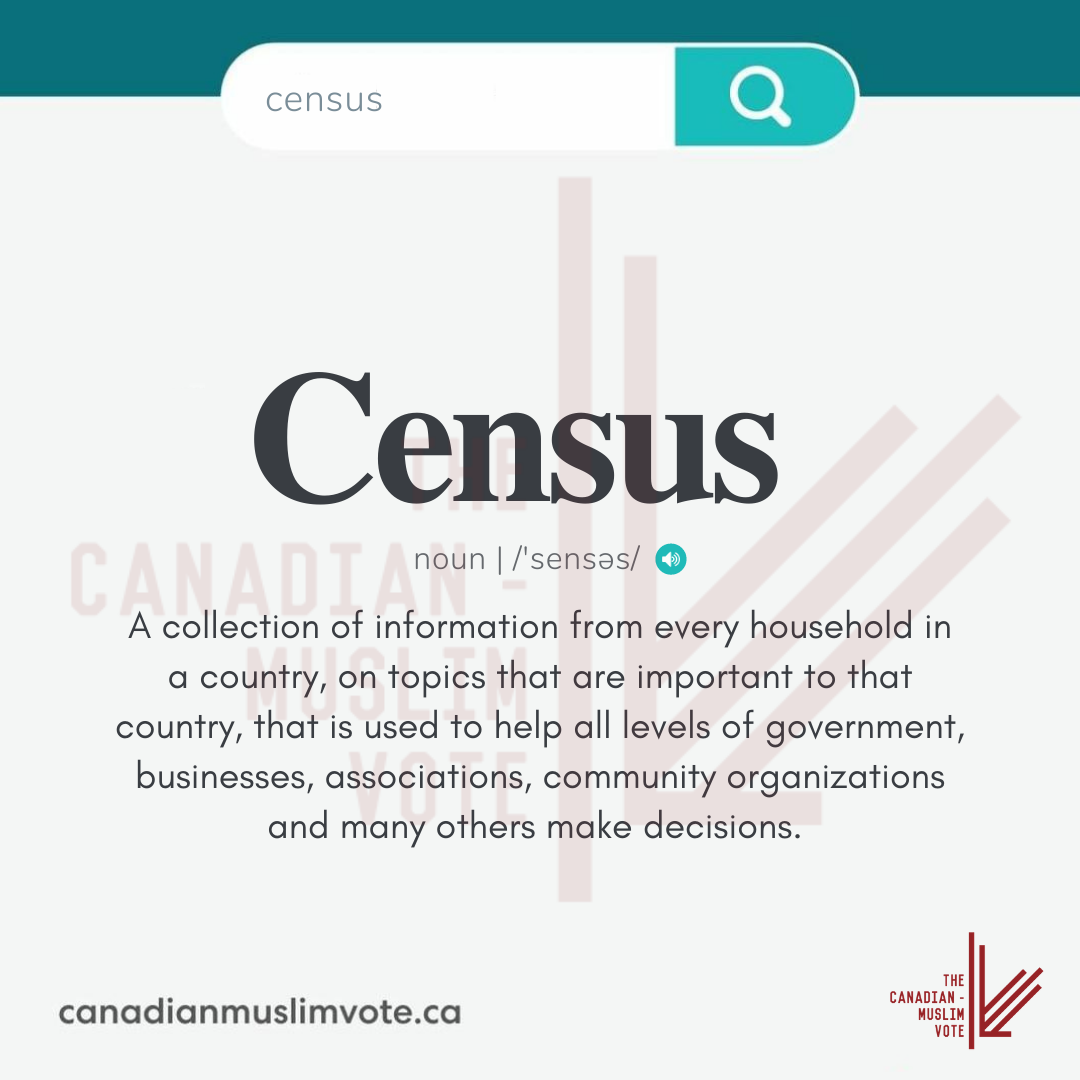 According to the Statistics Act of 1971, a Census must be conducted every five years. About 25% of the population receives a long-form questionnaire which collects information on the demographic, social and economic situation of people across Canada and provides data for smaller population groups and geographic areas. The rest of the Canadian population will receive a short-form questionnaire, which collects basic information. 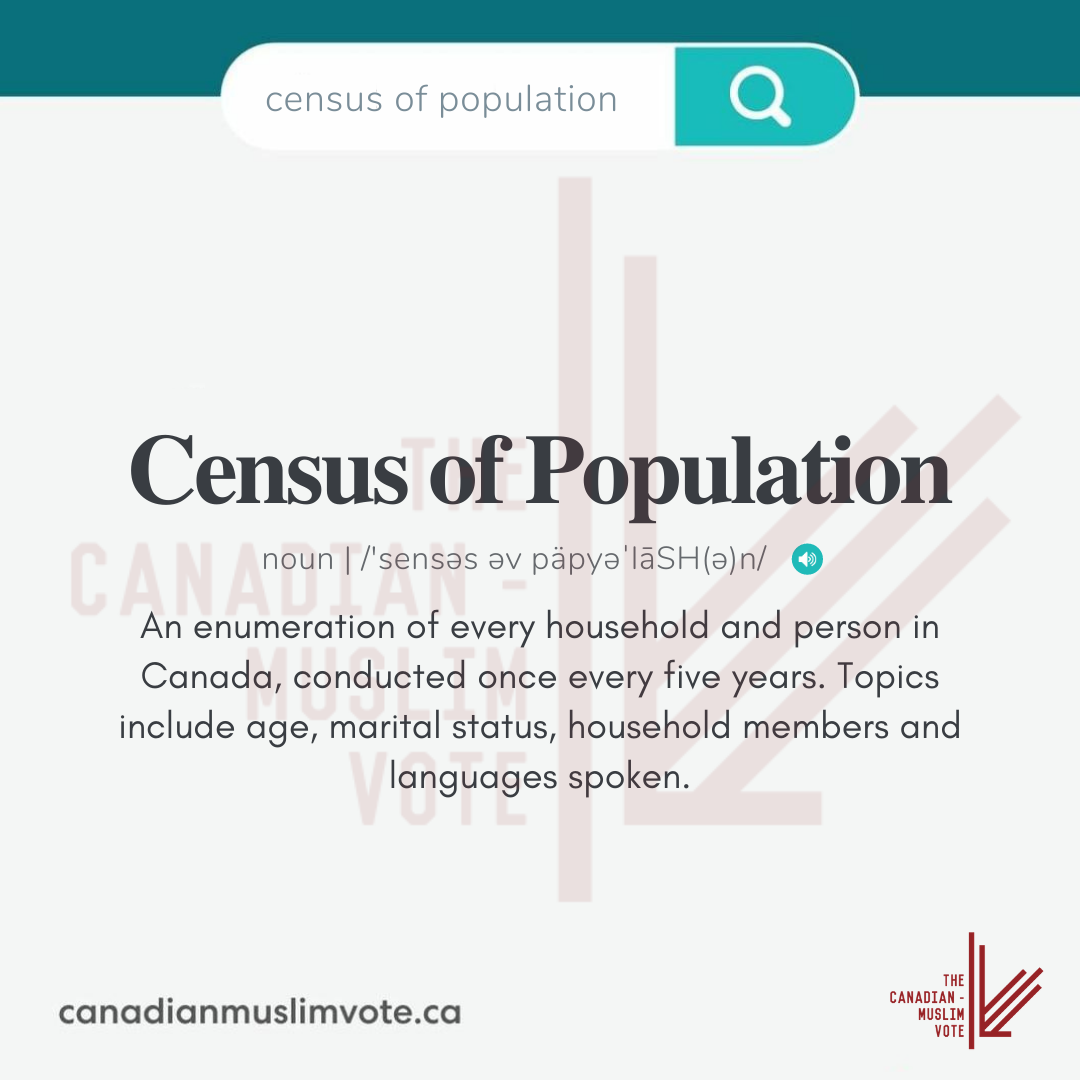 The Census of Population is completed every 5 years to estimate the population within the provinces and territories of Canada. It acts as the primary source of socioeconomic data for specific groups which includes First Nations people, immigrants, and various language groups.

The data obtained from the Census can help set electoral boundaries, recognize the demand for services in minority official languages and provide information about housing in specific geographic areas. 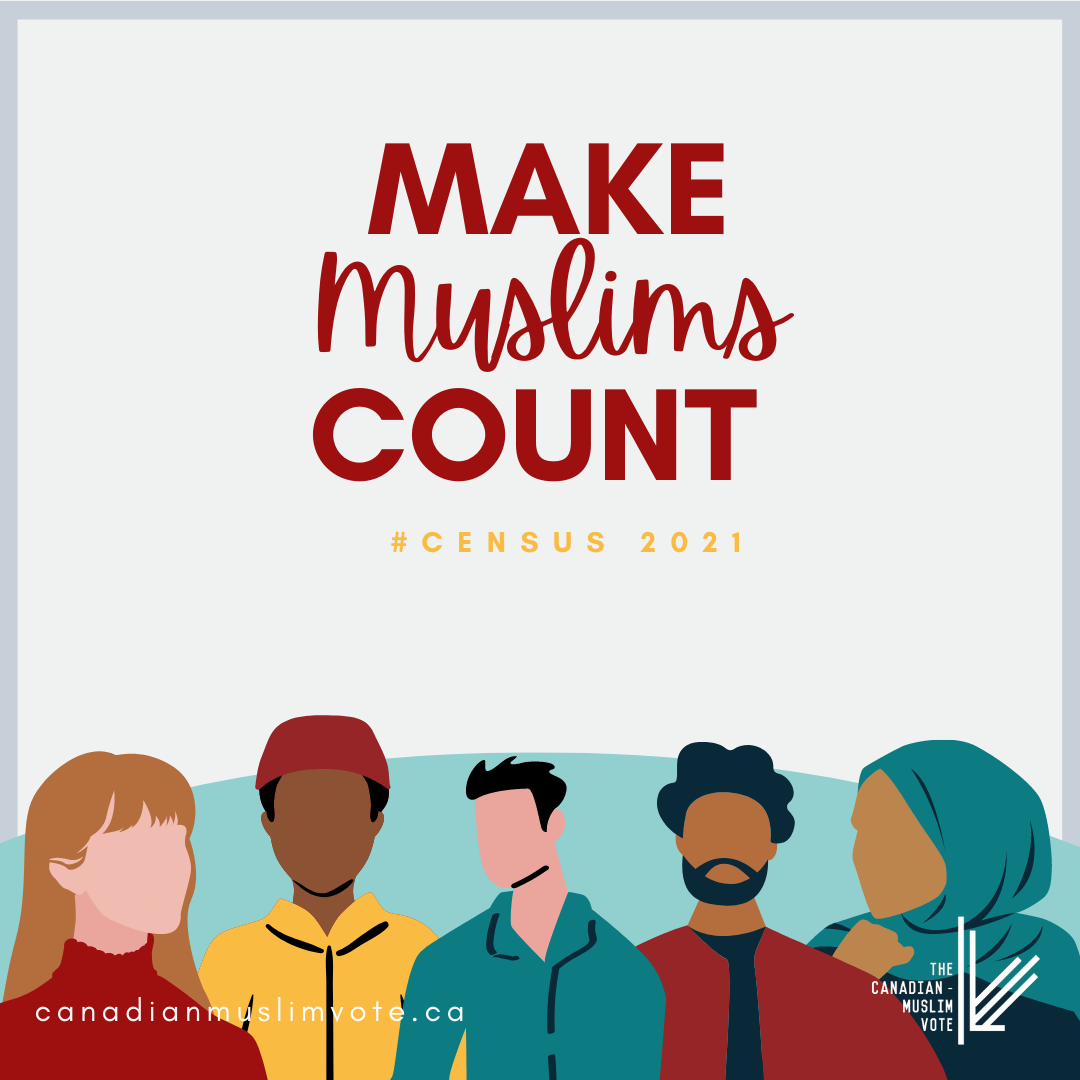 Question #30 on this year's long form questionnaire asks about religion. The last time this question was included in the census was in 2011. Question #30 is imperative as the data obtained from this question can be used to influence policy development to address islamophobia and discrimination, alongside other concerns and needs of the Muslim community. It's our mission to educate Muslims nationwide, ensuring they complete the census and answer question #30 honestly. 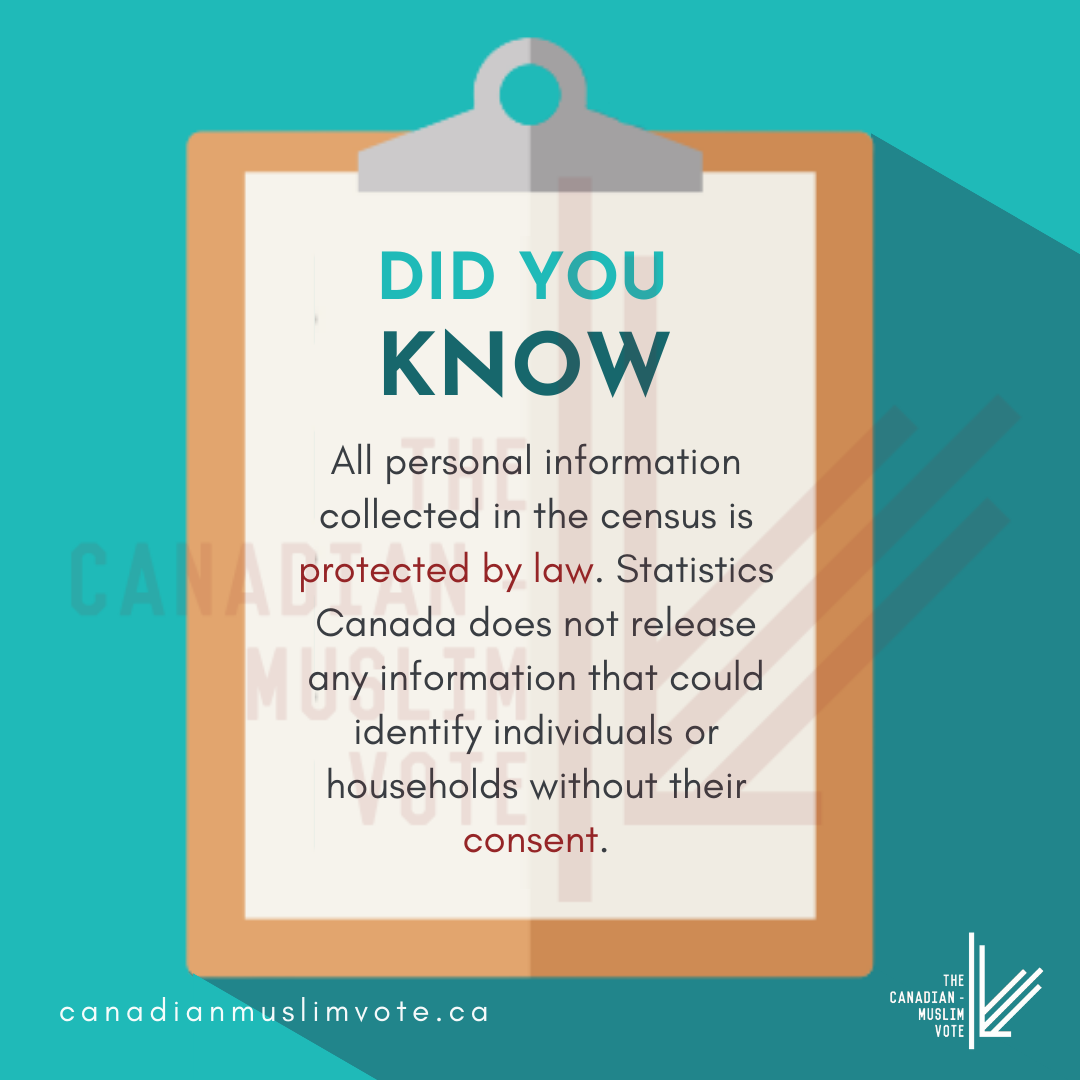 All this personal information collected in the Census is protected by law and information can only be released with obtained consent. The Census data are processed and stored on a highly restricted internal network, and can only be accessed by individuals who have taken the oath of secrecy. 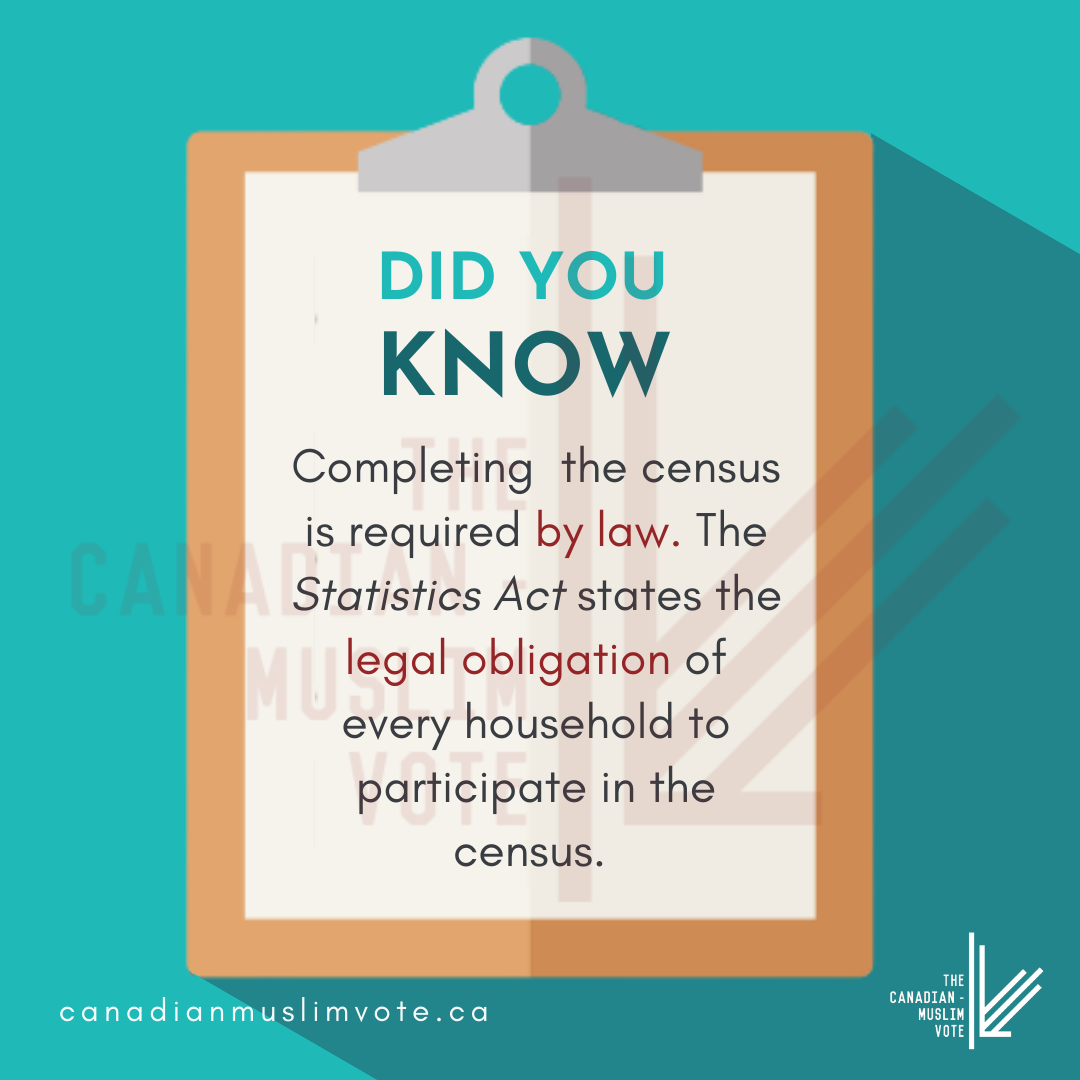 Completing the Census is mandatory, and is required by law under the Statistics Act. Anyone refusing to complete the Census questionnaire can be fined up to $500 or be sentenced up to 3 months in jail.

This year, 15 million households are expected to participate! May 11th, 2021 is Census Day.